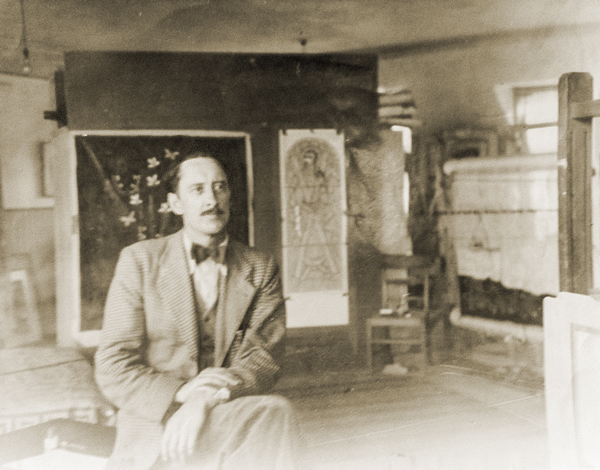 SCOTLAND has lost one of its most influential postwar artists with the death of Sax Shaw. A maverick talent of exuberant gifts, Shaw designed stained-glass windows which light churches all over Scotland; dragged British tapestry into the modern era at the Dovecote studio, and became a cherished mentor to generations of students at Edinburgh and Glasgow schools of art. Frequently kilted (his affection for his adopted country jostled happily with his loyalty to his boyhood Yorkshire) and with moustache extravagantly waxed, this colourful, passionate character will be sorely missed in Edinburgh’s New Town and beyond.

Shaw was the son of a metal-worker in the village of Berry Brow, and it was a chance meeting with an artist which led him to nearby Huddersfield College of Art and subsequently, trailing some glory, to its Edinburgh counterpart.

In the capital, like his contemporary Willie Wilson, the young Shaw studied in a school of stained glass which was pre-eminent in Britain under the influential Herbert Hendrie. But it was a scholarship to Paris one “cold, hungry” winter which was the turning point. There, having travelled to research the stained glass of France’s cathedrals, Shaw found himself drawn into the celebrated Gobelins tapestry workshops, in a world alive with the radical new work of Lurat, Picasso and Matisse.

Back in Scotland, he was sought by both Edinburgh College of Art and Glasgow School of Art for the teaching work which was to be one of the gifts of his professional life.

His reputation in stained glass and tapestry was growing, too, and in 1955 he was appointed director of weaving at the Edinburgh Tapestry Company’s Dovecote studio in Corstorphine, where, in the words of the Scotsman art critic, Edward Gage, he became “the true pioneer of the Scottish tapestry renaissance”.

Tackling this laborious and marginalised medium within a company previously devoted to monumental tapestries for the Marquis of Bute’s family, Shaw manhandled it into the 20th century, simplifying the working practices, introducing a heavier, less detailed weave and fewer colours, and wresting the work away from the traditional copying of period paintings.

By the time of his departure to pursue ambitions too adventurous even for the Dovecote, he left behind him a thriving company of international reputation, with work already in place in the cathedrals of Glasgow and Coventry.

Shaw‘s own design style was often semi-abstract and richly colourful, the outpouring of an emotive, deeply romantic vision. By 1960 he could be found working at a huge loom in his New Town flat in Edinburgh, producing inch after painstaking inch of the vibrant, dramatic works which now hang in San Francisco and Reykjavik, Sydney and London. The stained-glass output, too, was prodigious; walk into Lochgilphead Parish Church, or Saint Thomas Church on Fifth Avenue, New York, and you will find Shaw‘s creations in contrasting, but celebrated, surroundings. Loath to over-emphasise the distinction between media, he was simultaneously producing murals, mosaics and vivid watercolours.

Throughout this time the door of the family home opened to a seemingly ceaseless stream of artists and musicians, kids (joined in time by Shaw‘s treasured grandchildren, Felicity and Andrew), students, local characters, and sometimes hapless passers-by who were simply snared from the front step into joining the lively party within. Stockbridge itself was becoming a bohemian, raffish community, and Shaw was delighted when a local publication declared that the area “begins at Sax Shaw‘s house in Howe Street …”

Those who sat at the artist’s feet, though, were seduced as much by the personality as the talent. This was a man who had worked as forester and farmer for wartime years while outcast as a conscientious objector; a man fiery with enthusiasm for culture and life, and yet devoted to a philosophy of gentleness and respect for humanity. Today’s highways of the arts and architecture all over the world are busy with high achievers who were once Shaw‘s students in tapestry, stained glass or architecture. Many remained his lifelong friends.

And beside him always, since their meeting in Edinburgh in 1939, was Maisie Mallinson – for this was a life which was made in partnership. A talented artist herself, Mallinson collaborated with Shaw on the design and book for Marjory Middleton’s wartime ballet, The Horses, and thereafter devoted herself to steadying a talent which did not always sail in tranquil waters. Their two sons, Kevan and Christian, are today prominent in their own artistic fields of lighting design and stained glass.

Shaw was never one to expend precious time promoting himself or courting the artistic establishment, and his story has been less sung than that of many lesser, louder voices. His legacy, nevertheless, will remain brightly and indelibly interwoven into the history of modern Scottish art.